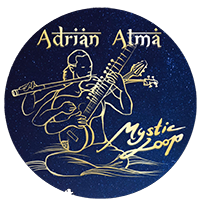 Adrian atma it’s an orchestra in one body, a travel in the whole world in one song,
a whisper from the soul.
The concert “Mystic Loop” is a very touching experience and the audience often
report to have been carried away and elevated. We dive deep into the
multilayered auditory experience of the loopstation, acoustic instruments,
beatbox groove and voice.

Like no other, Adrian blends with virtuosity the sounds of Indian Sitar, Guitar,
indian bansuri(flute), Violin and duduk. He takes you on the journey in his
mystic universe with flavours of Indian classical, flamenco, shamanic, mantras,
middle eastern..

The Idea of this project is base on improvisation, spontaneity and channeling.
Therefore the performance is always unique. The same seed songs are
performed but always with variations specific to the moment and the audience.

Adrian was born in France and started his journey with music in his early 20’s. autodidact learning by himself guitar, piano and many other instruments. first band was a french songs repertoire for which he was writing and composing. Very Fast he grew his music skills into flamenco, french gypsy jazz, Klezmer, middle eastern music.

In france released an album in 2009 with his trio “meridiano”. Mixture of gyspy jazz and flamenco, they performed for several years on stage in France and Europe.
Then his music journey took a whole different dimension when he start traveling in solo all over the world.

His first “perlgrimage” to India transform his perspective on music. Recorded studio album in 2011 in Jaipur (india) with Rajasthani musicians and later another album in Mexico 2012 with “ the soul fire project”.
This great travel in all europe, balkan country, greece, turkey, middle east, Asia, india, and mexico inspired him and gave a great shift to his approach to music!

A powerful experience brought him to engage himself deeply on spiritual path and stoped music for 5 years and dedicated his life to practice of meditation, tantra, shamanism and yoga.
Since then he restart music with a different approach and create this project “Mystic loop”.

For him music is very sacred and a spiritual practice itself. He perceived the power of transmission through his music to the audience which can awake deeper aspect of their being.